What makes the Cross what it is?

For God so loved the world, that He gave His only begotten Son, that whoever believes in Him shall not perish, but have eternal life.
John 3:16

The sign of the cross is the most powerful symbol in the world. The death of Christ is the pivot of time, the Rock that never rocks, standing in the sea of history, with the waves beating against it but never moving it. It is our sole but abiding hope.

Christ died for us. That event was a cosmic explosion of love and goodness, shattering the rock-solid walls and iron gates of every bondage that ever tyrannized mankind to open up the eternal purposes of God.

The average Christian enjoys a quality of life that no other religion offers even to its most ardent seekers. Only Jesus saves because only Jesus died to be able to offer what he offers. Nobody else stands where he stands. The most wonderful “mystery” is that of the redeeming death of Christ. We shall never know its depths because what happened lay mainly in the heart of Jesus and the Father.

The cross impacts people’s minds in many ways. Some think of Jesus as a martyr – a reject. Others see the agony of Christ as a picture of the world’s agony. He was certainly one with it all. He achieved solidarity with us and bound God into our world and its woes. We need not ask, “Where is God?” We look at the cross and see him there, sharing the heartbreak, shame and pain.

The message of the Cross

Seven weeks after the mob howled for his blood, Peter publicly accused them: “You, with the help of wicked men, put him to death by nailing him to the cross. Let all Israel be assured of this: God has made this Jesus, whom you crucified, both Lord and Christ” (Acts 2:23, 36). The effect was astonishing and could never have been anticipated. The preaching of the cross brought 3,000 people to repentance. The first names were written in the Lamb’s book of life.

Christ crucified has been the core of the Christian gospel ever since. No gospel could be stranger. Religions point to their great founders but the Gospel of the crucified Christ seems to be crazy, mind-bending foolishness. Yet Paul said, “I am eager to preach the gospel to you who are at Rome. I am not ashamed of the gospel” (Romans 1:15).To Roman citizens in Corinth he declared, “I resolved to know nothing while I was with you except Jesus Christ and him crucified” (1 Corinthians 2:2). Paul knew such a message would be a “stumbling block” to Jews and “foolishness” to everybody else (1 Corinthians 1:23) but he preached it just the same. The world heard and changed. That message looked decidedly unlikely to transform a degraded age – but it did. This message remains the message. Christ crucified has no competitors.

Jesus took three disciples to the Mount of Transfiguration, where a wonderful thing happened. Jesus became gloriously transfigured and two characters from the past re-appeared, Moses and Elijah. The disciples were overwhelmed by what they saw and heard them talking to Jesus about dying and how great an event that death would be. It was obviously the talk of heaven. We read, “They spoke about his departure, which he was about to bring to fulfillment at Jerusalem” (Luke 9:31). The Greek word translated “departure” is our word “exodus” (exodos), which makes us think of Israel’s deliverance from Egypt, a mighty manifestation of divine power. Death is spoken about as an exodus only twice in Scripture, the second time being when Peter (who had been with Jesus on the mountain) spoke of his own death. He had learned there that death really is a triumphant event.

When Jesus died, he shouted with a loud voice. In that moment he surrendered his life to God, crying, “It is finished!” (Greek: tetelestai, from teleo).The Roman centurion heard that. He had seen men die but never so triumphantly and he said, “Surely this was a righteous man. Surely he was the Son of God” (Luke 23:47, Matthew 27:54).

The Greek word tetelestai means more than the word “finished”; it means “accomplished,” “concluded.” A related Greek word is used in John 17:4; Jesus prayed, “I have brought you glory on earth by completing (Greek: teleioósas) the work you gave me to do.” The word occurs again in John 13:1 (NKJV): “Having loved his own who were in the world he loved them to the end” (Greek: eis telos).

He came to destroy the works of the devil

Describing Christ’s sufferings many centuries before they occurred, Isaiah said, “He was led like a lamb to the slaughter and as a sheep before her shearers is silent, so he did not open his mouth” (Isaiah 53:7). He submitted to his enemies but he did not have to; he could have slain them with a word. It looks as if Jesus died as a helpless victim but in that lay his greatness and love.

On the cross Christ did more than touch our feelings, he fulfilled a purpose that he had chosen and that he had talked about all the way through his ministry. He often spoke about his forthcoming death. “Now is my heart troubled, and what shall I say? Father, save me from this hour? No, it was for this very reason came I to this hour” (John 12:27).

“This hour” – there had been great hours when Jesus healed the sick, raised the dead, and taught the multitudes. But during those hours he spoke of “the hour” when his life’s objective would be realized, the consummation of all that he lived for. That hour was his last hour when he died an atoning death. Death was his aim. He came to confront that enemy. He came to destroy the works of the devil. Jesus was not pursued by death; he pursued and challenged death. He forced the king of terrors to keep an appointment with him, a duel. He cornered the enemy, grappled with the awful reality and “tasted death for everyone”(Hebrews 2:9).

Marked with the scars of battle, but crowned with victory

The first reference to the battle on the cross is Genesis 3:15: the seed of the woman would crush the head of the serpent but his own heel would be bruised. Jesus also spoke of being “distressed” until it was done (Lk 12:50). The word means pressed, constrained, gripped with an intention. He constantly anticipated his encounter with death, the great enemy. In the Garden of Gethsemane and at Calvary he grasped the serpent of death, strangled the life out of it and returned from the fight three days later bearing the scars of battle but crowned with victory for us all.

“Our Savior, Jesus Christ, has destroyed death and has brought life and immortality to light” (2 Timothy 1:10). “He too shared in their humanity so that by his death he might destroy him who holds the power of death – that is, the devil” (Hebrews 2:14). The Greek word katargeo, which is translated “destroy,” means to be emptied of strength, to be made inactive, useless. The day of victory has come about as a result of Christ’s triumph, when “death has been swallowed up in victory” (1 Corinthians 15:54).

On the Cross, Christ milked the serpent fangs of its poison

What is sin? It is the effect on God of human rebellion. Wickedness touches God. He senses all injustice, merciless cruelty, hatred, wrong and evil. He senses it because he loves us all. His reaction is not that of an offended dignity but of a Father. “Against you, you only, have I sinned,” said David (Psalms 51:4). God is not indifferent to what is going on. He is wounded, stabbed by human willfulness as hostility against his very heart and infinitely holy being.

Christ knew the dreadful load and its physical horrors and spiritual blackness and became sin for us, endured our judgment hell, standing between us and the fate we deserved. Jesus brought us eternal forgiveness. God did not blamehim or make him guilty, but he bore our judgment for us as our great ‘Second Adam’, our representative.

The gospel truth is that evil is not only forgiven but mastered, overcome. Jesus overcame the worst the devil could do. This was the promise: “I will forgivetheir wickedness and will remember their sins no more” (Jeremiah 31:34).Nothing of it remains in his mind or heart to haunt or condemn us.

If we preach any other gospel, it is not the gospel of Christ. We betray the world when we neglect the horrors of the Cross, if we present that event wrapped in politically correct cotton wool. Without the truth of the Cross, the world will die.

When God gave his Son, He gave everything he had.

Hanging on the cross, Christ displayed the full extent of his love. How? If a man told his wife, “I love you and I’ll prove it by shooting myself,” that man would be insane. How could suicide prove a man loved his wife? It did nothing for her. However, if he was shot trying to protect her, losing his life to save her, that would be love. That is how Christ died for us, not for the sake of dying, but to die for us and save us. Our sins would destroy us but “he himself bore our sins in his own body on the tree”(1 Peter 2:24).

God himself had to intervene and bear the whole brunt of evil himself. God keeps the whole order of nature together. It shows his love for his creatures, but he never mentioned that. One thing he did say: “God so loved the world that he gave his one and only Son” (John 3:16). God never did anything greater than give his Son. He had nothing greater to give or do. It was the only true sacrifice possible to God. Creating more worlds was nothing in comparison. Giving every one of us the wealth of a whole planet would cost him nothing but in giving his Son, he gave everything he had.

It is a staggering fact, but it took all God had to save us! It took Jesus to come, weep, and pray for us in the garden, to be arrested and to submit to the most unendurable treatment, and to experience the sword of divine judgment piercing his body. That is what he did and it tells us what our plight was. Only God could save us.

That is why we preach Christ crucified. God had to go to such lengths for people, we had better tell them about it.

We’ve prepared this special Easter Sunday video to bless you today, wherever you are. We want you to know that you are part of our CfaN family, and we… 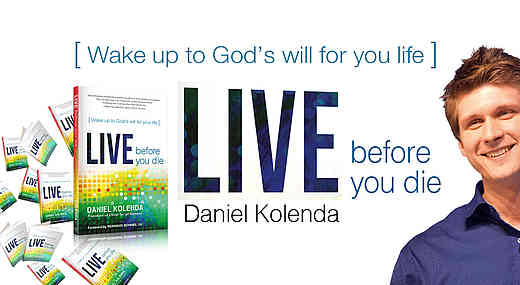 Daniel Kolenda’s inspiring book, “Live before you die,” goes to the heart of the questions that we all have when we’re seeking our purpose. In this… 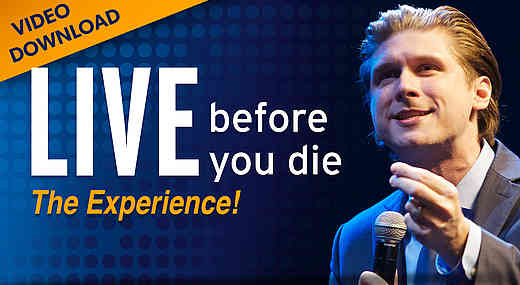 – The Experience – is a dynamic, multi-media enhanced teaching series based on Daniel Kolenda’s best-selling book by the same name.

It’s an enormous undertaking with a very big price tag. But with the help of our mission partners, we are already more than halfway there!