The apostle Paul said, “My message and my preaching were not with wise and persuasive words, but with a demonstration of the Spirit’s power” (1 Cor. 2:4). And again, “For the kingdom of God is not a matter of talk but of power” (4:20). In both these passages, the word for power is dynamis. The word means “power, might, strength, force or capability.”

It is especially used in reference to miracle-working power. We are talking now about a power that accompanies the proclamation of the gospel, bringing supernatural results and even miracles! Where do we get this power?

Jesus made a promise to us

In Acts 1:8; Jesus said, “But you will receive power [dynamis] when the Holy Spirit comes on you; and you will be my witnesses in Jerusalem, and in all Judea and Samaria, and to the ends of the earth.” Jesus promised them they would receive the power to spread the gospel when the Holy Spirit was poured out. The fulfillment of this promise happened a few days later on the day of Pentecost. We read about this outpouring in Acts 2.

Throughout the rest of the Book of Acts we read over and over how those in the early church received this precious gift. There are many debates about what Spirit baptism is or means. People argue about when it happens, if it is subsequent to salvation, if it comes with evidence, and what that evidence might be. Here is what I believe is important. Jesus said this outpouring would be accompanied by power (dynamis). Many Christians have reduced this power to something all believers have, whether or not they know it. It is more of a theoretical power than anything actual or tangible. It does not affect their lives in anything but the most ambiguous of ways. For those who see it as such, I would like to point out two things.

The power is always evident

First, there is no example in Acts of anyone ever receiving the outpouring of the Holy Spirit without being aware of it. You can argue about what signs or gifts might be indicative of Spirit baptism, but you cannot deny that in every case they had a conscious Holy Spirit

experience. Second, some evidence of power always accompanied these Holy Spirit experiences. In some cases, they spoke with tongues, prophesied, received boldness, etc. But in each case power was evident.

Without getting into a prolonged and detailed teaching on what Spirit baptism is, I would simply say that all Christians need an experience of empowerment in their lives. This should be something they are conscious of, not merely a theoretical and theological truth. This power is necessary for serving God and living for Him. It is a nonnegotiable, mighty weapon of our warfare.

The power and the glory of God are our inheritance

Because God has already rent the heavens through the blood of Jesus and given us access to all of His resources through prayer, we can live and work under an open heaven! Because of this truth, the glory of God is our inheritance as the children of God.

The word “glory” is found throughout the Bible. It can be used in several ways. One example that is found in Scripture is when “glory” is used to describe honor, wealth, and power. This would be like a reference to the “glory” of a king or a person held in high esteem. The second usage of the word is to describe God’s manifested or tangible presence. If we carefully examine this definition of “glory,” we will discover that it can be used to describe personal encounters that people have in which God’s glorious presence moves out of the supernatural realm into the earthly realm. It is experienced by people using one or more of their five natural senses: sight, hearing, taste, touch, and smell. Are we saying that God can be experienced in this way? Yes!

Ordinary people had a physical experience of God

Throughout the Scriptures of the Old and New Testaments, we find examples of times where ordinary people experienced God in these ways. Approximately 2 million of God’s people saw His glory with their physical eyes by day as a pillar of cloud and by night as a pillar of fire. This wasn’t a mystical or emotional spiritual experience. These people actually saw the cloud by day. They saw the fire by night. Children who were born in the wilderness grew up never knowing that this manifested, visible revelation of the glory of the Lord was something that was out of the ordinary!

Moses saw and experienced this same holy fire when he stood before a burning bush in Exodus 3:1-6. God spoke to him in this place and even told him, “Take your sandals off your feet, for theplace where you stand is holy ground” (Exodus 3:5). Moses saw the fire of God and experienced something of His holiness as did Isaiah because the Bible says, “he was afraid to look uponGod” (v.6 NKJV).

of Pentecost. This example involved people physically hearing the sound of His glory as the Holy Spirit was poured out upon those who had gathered. Acts 2:2-3 records:

“And suddenly there came a sound [they could hear] from heaven, as of a rushing mighty wind, and it filled the whole house where they were sitting. Then there appeared [theycould see] to them divided tongues, as of fire, and one sat upon each of them.”

The glory of God is our inheritance as the children of God.

The miracles of Jesus were revelations of the glory of the Lord, because they were heavenly invasions that impacted people in ways that they could experience using their natural senses. In John 2, we find the story of the first miracle Jesus did at a wedding in Cana where something terribly embarrassing for the host family had occurred – they had run out of wine!

Mary, the mother of Jesus, came to her Son asking Him to please do something. Jesus commanded the servants to take six large water pots, each one capable of holding between 20 to 30 gallons, and to fill them with water. They filled them to the brim. When the master of the feast had tested the water, to his utter amazement it had become the finest of wine. This was the first miracle Jesus performed. John recorded the account this way, “This beginningof signs Jesus did in Cana of Galilee, and manifested His glory; and His disciples believed in Him” (John 2:11). God’s power flowed into the earth and six pots of water had been turned into the finest, most exquisite wine as a result of this heavenly intervention.

They were all filled with the Holy Spirit

In Acts 4, we read the account of the intercession of the early Church as they prayed for more boldness to preach the gospel and see powerful demonstrations of the Holy Spirit through signs and wonders. The Bible says, “And when theyhad prayed, the place where they were assembled together was shaken; and they were all filled with the Holy Spirit, and they spoke the word of God with boldness” (Acts 4:31).

When these people who had already been filled with the Holy Spirit on the Day of Pentecost prayed for the boldness to preach the gospel without compromise, the glory of God filled the place with such power that even the physical building where they had gathered was shaken! Heaven invaded the house! That’s power!

In Acts 5:14-16 we read that the measure of God’s manifest glory was resting upon Peter in a great way:

“And believers were increasingly added to the Lord, multitudes of both men and women, so that they brought the sick out into the streets and laid them on beds and couches, that at least the shadow of Peter passing by might fall on some of them. Also a multitude gathered from the surrounding cities to Jerusalem, bringing sick people and those who were tormented by unclean spirits, and they were all healed.”

Jesus’ promise of power has not changed

It is incredible to think that it is possible to walk in such a measure of the manifest glory of God that no sickness or demonic power would be able to stand in our presence any more than a snowball can withstand the blue flame of a welder’s torch!

And two thousand years later, nothing has changed. The power of Pentecost, God’s glory manifest in us and through is, is still our birthright, through the work Jesus finished on the cross. God, in all His splendor, can and does move into the natural realm of human existence where He can actually be experienced by people. Take hold of your inheritance today! 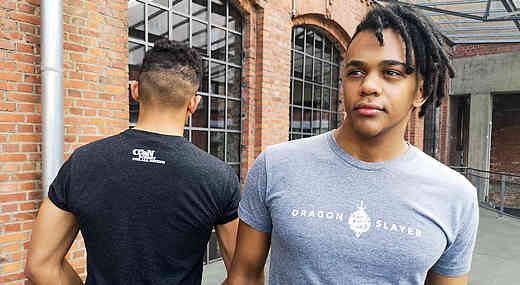 Daniel Kolenda introduced and wore this T-Shirt design in Pensacola. Taken from the book cover of “Slaying Dragons”, it’s available in black and grey.…

In Slaying Dragons, Daniel Kolenda shows readers what the enemy is trying to accomplish and how they can slay every dragon they encounter – in their… 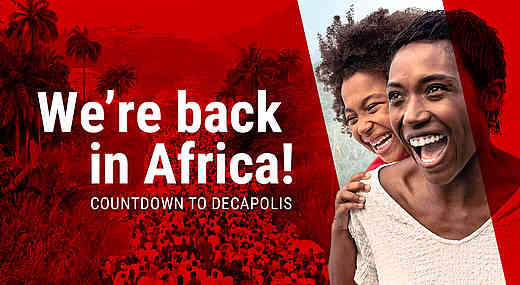