The Mystery of the Magi

The Old Testament declared that Gentiles from around the world would come to the Messiah bearing gifts that actually included gold and frankincense (Psalm 72:10-15; Isaiah 60:1-6). When the Magi from the East visited Jesus, they partly fulfilled this prophecy. The nations were indeed paying their respects to the great Jewish king, even bringing gold, frankincense and myrrh to honor Him. These gifts carried powerful prophetic meaning.

Gold had great value in Jesus’ day as it does in ours. It would have been a wonderful financial blessing for Galilean peasants who probably had very little. Some scholars have suggested that this financial gift may have funded the flight of Mary, Joseph and Jesus into Egypt to escape Herod’s murderous rampage.

But in addition to its obvious practical use, gold was a gift for kings, and the Magi had come to meet the greatest King of all. The Messiah that Daniel foretold was to be a great King that would rule over the whole earth.

“I was watching in the night visions, and behold, One like the Son of Man, coming with the clouds of heaven! He came to the Ancient of Days, and they brought Him near before Him. Then to Him was given dominion and glory and a kingdom, that all peoples, nations, and languages should serve Him. His dominion is an everlasting dominion, which shall not pass away, and His kingdom the one which shall not be destroyed.”

It is no wonder the Magi would have been eager to meet the Jewish Messiah and honor Him with gold. Truly, this was to be the King of all kings and the Lord of all lords; that is why they came with gold. They had no more valuable resource to worship the highest-ranking King of all time and eternity.

Frankincense and Myrrh are both resins (or gums) that come from the sap of trees. Frankincense comes from the Boswellia tree and myrrh from the Commiphora tree. Both substances are edible and fragrant with multiple purposes, the most practical of which are medicinal. Probably the most obvious reason these gifts were given to a baby was to care for Him and to treat any potential ailments, scrapes and bruises. They reveal a very tender side of the Magi. They had not come simply to pay respects out of dutiful reverence. These were heartfelt gifts of care and love. They had come to worship.

Prophetically, we can see even deeper meaning to these gifts. Frankincense and myrrh were gifts often presented to the gods. In the East, as well as Egypt, Rome and many other places, frankincense was used in religious ceremonies as part of the recipe for aromatic incense. The Magi probably had no idea that it was also used by the Jews in temple worship as a fragrant offering to God.

The Messiah predicted by Daniel was clearly an extraordinary person. In fact, He could not be considered a mere mortal at all. The person described by Daniel was nothing less than God-man. Daniel called Him, “The Son of Man,” a title Jesus often used for Himself, identifying Himself as both human and divine.

Somehow, the Magi understood that Jesus was more than a man and even more than a king. They had not come merely to esteem a great king, but to worship the divine King. In Scripture, neither mortals nor angels are permitted to receive worship. Jesus was greater than a man, and He was greater than the angels. He was and is the unique and eternal Son of God.

The Bible reports the exact gifts the Magi presented to Jesus because each one was important and prophetic. Yet, as profound as those three gifts were, Christmas is not just about the Magi’s gifts to Jesus, and it is not about our gifts to each other. It is not even about our gifts to God. The real significance of Christmas is what God gave to us: His only Son and the only gift that would cost Him something.

These are great truths, but if we merely analyze and reduce them to doctrines, we will miss the visceral reality of the Father giving His only Son. To understand the cross, we do not need a theological degree. We need an honest look into the raw realities of love and life. If we know what it means to feel pain, what it feels like to lose something precious, give sacrificially, or love selflessly, then we can begin to relate, in a small way, to what God did. He gave us what was most precious, costly and painful to Him.

Think about this. What gift could God give that would show you His love? If God gave you a million dollars, you would appreciate it, but it wouldn’t cost God anything. He can make a million dollars with a snap of His fingers. If God gave you a planet, it would cost Him nothing. If He gave you an entire galaxy, it would be effortless. He spoke the worlds into being. But when God gave us His Son, heaven went bankrupt.

When the angels announced the birth of Christ, they declared peace on earth and goodwill to men (Luke 2:14). This phrase has been used so much that it has become cliché, but these are some of the most important words that have ever been uttered. The coming of Jesus was a message from God: the ultimate expression of His love and goodwill toward us.

One of my favorite verses is Romans 8:32: “He who did not spare His own Son, but delivered Him up for us all, how shall He not with Him also freely give us all things?” In that verse, Apostle Paul points to the Cross as the ultimate proof of God’s goodwill toward man. If God would give His only Son to us, if He would allow Him to suffer and die in our place, to be wounded, bruised and broken for us, we can be sure that He will give us anything else that we need.

With that one gift, God gave everything He had and everything we need. It was the one gift in which all other gifts are contained. Ephesians 1:3 says that God has blessed us with EVERY spiritual blessing IN CHRIST! There is one thing God has to say and one gift Heaven has to give: Jesus! When you receive Jesus, you receive every gift of God, because EVERYTHING God has to give is in Christ! When God gave His Son to us, He gave us His everything: His entire estate. That is the message of Christmas. Those who receive God’s Son receive all the treasures of heaven. For those that reject Him, God has nothing else to offer.

What does this mean?

The Magi left everything behind and traveled to a distant land to find the One foretold by Daniel and the prophets of old. Their gifts recognized him as God, as King and as heaven’s indescribable gift to us. Amazingly, they somehow knew the hour of their visitation, even when Israel missed it. They had not yet seen His miracles or heard His teachings. They did not possess all the Scriptures telling of Messiah’s death, resurrection and future return. They were truly “wise men” in the ultimate sense, signaling that, one day, people from every tribe and nation would stream to the King of the Jews. Therefore, Scripture has immortalized their astounding faith. They are now a powerful example to us, thousands of years later. Their story takes us beyond the traditional Nativity Scene into the real Christmas story. God is still drawing men and women from “far off” to be brought near through the blood of Christ.

The door has been open wide. Salvation is available, not only to those who are “kosher”, but to anyone who will call upon the name of Jesus. Ephesians 2:13 says, “But now in Christ Jesus you who once were far away have been brought nearby the blood of Christ.”

You don’t need to traverse a thousand miles to find God. He already sent His Son from Heaven to earth to find you. 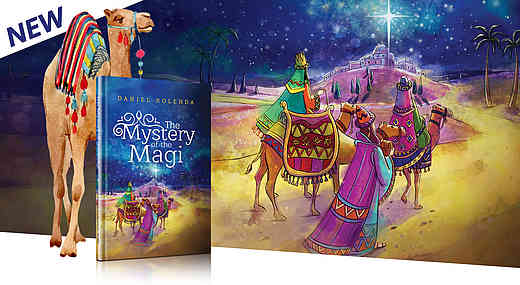 “The Mystery of the Magi”

This book is perfectly suited to be a small, inspiring addition to your Christmas gifts for friends and family members. You can order this…

The Mystery of the Magi - Part 1

You’ve heard the story of the three wise men, but what you haven’t heard is the Mystery Of The Magi: How a star led them to Jesus and what part they…

The Story of Alfonso Myar

Only Jesus can satisfy

When Alfonso’s parents were killed, his life spiraled out of control. He stopped believing in God and pleased himself by turning to a variety of…

God is a Way Maker and Miracle-working God! Don’t miss this powerful song recorded with Eddie James (Official) at a Gospel Campaign.

Reinhard Bonnke’s Last Words to Me

Nearly a year after Reinhard Bonnke’s passing, I pay tribute to one of God’s greatest generals and open up -for the first time - on what it was like…

The signs of Jesus' return