Our ministry, Christ for all Nations, has conducted some of the largest evangelistic events in history.

Most of the time when people think of the ministry of Christ for all Nations, they think of evangelist Reinhard Bonnke or myself— the preachers. But some of the most important people in our ministry work behind the scenes.

One of my heroes is a man named Winfried Wentland. For more than thirty years he has been driving our trucks across Africa as a part of our technical team. Twelve times he was almost killed.

He has been shipwrecked, pulled from the bottom of a crocodile-infested river, caught in the crossfire between rebel armies, escaped from the hands of terrorists, robbers, child soldiers, and thugs. He has contracted malaria nearly two dozen times. Few people have had such adventures and heroic exploits for the gospel. However, Winfried says, “This is not about personal satisfaction. To do this kind of work, apart from God’s calling, you also need great perseverance. Most of the time it is just physically demanding, hard, dusty, routine work.”

Winfried and the men who work alongside him are experts in their respective fields: engineering, electronics, logistics, and so on. And although these vocations are not typically thought of as being associated with ministry, their work is absolutely vital to our mission. As a direct result of their efforts, literally tens of millions of precious Africans have received Jesus Christ as their Savior.

My friend, no matter what God calls you to do, realize that He wants to use you for His glory and for the expansion of His kingdom.”

This is Daniel Kolenda
encouraging you to live before you die.

What Are You Living For?

On the wall of the south choir aisle of Westminster Abbey hangs a memorial stone to John and Charles Wesley that says, “God buries His workmen, but…

Some people have a heart that is filled with compassion for a particular people group, cause or need in the world. These are often God-given burdens…

Leonard Ravenhill once asked the question, “Is what you’re living for worth Christ dying for?”

I Will Be With You

In the story of Gideon, found in the 6th chapter of Judges, It’s amazing to think that even after the Angel of the Lord had appeared to Gideon and…

I Am Your Reward

Often when people say that they don’t know God’s will, what they really mean is that they have not heard an audible voice from heaven.

Faithfulness In The Small Things

As I look back at my own life, I’m amazed to think about what God has done. Today I lead the international evangelistic ministry of Christ for all…

We Are All Called

There seems to be a perpetual conflict in the Christian life between what is “good” and what is “God.”

Christmas is just around the corner! We’ve put together some beautiful gift ideas for your family that we know will bless them greatly, long after… 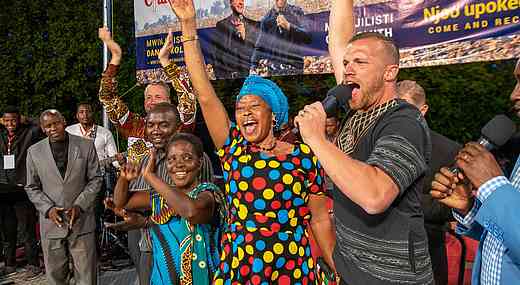 The harvest is now!

The third night in Arusha and Singida was “Holy Spirit Night”, and many thousands received the baptism in the Holy Spirit.

In Kahama, Tanzania, I preached on the final night of the Gospel Campaign on the spiritual laws of sin, death, and salvation. We also prayed for the…

The Experience is a dynamic, multi-media enhanced teaching series based on Daniel Kolenda’s best-selling book by the same name. You will embark on a journey that will take you across the world and through history, Scripture, and personal experience to discover keys for unlocking your destiny and purpose.

Video-Download contains 7 Films with a total length of 239 Min. in MP4-Format (12 GB Download)

Get your copy here